I’ll also be a panelist for the discussion with Ken Goldberg, Kim Baraka, Patricia Alves-Oliveira, and Eunsu Kang. After years working with mechatronics and various kinds of automation, I’m really looking forward to this discussion with this brilliant group of panelists!

Thrilled to join these two events at York University next Mon/Tues in Toronto! See my project a #machineforliving in ‘Disruptive Design and Digitala Fabrication’ at York U AMPD Feb 3-13.

For the ACM Designing Interactive Systems/Cognition and Creativity conference in San Diego in 2019, I designed a new composition for Rover to play across the 70 megapixel VROOM tiled display at the Qualcomm Institute.

I have contributed live computer vision and a textual sensor feed for #projectamelia, a new interactive live performance collaboration with #bricolagetheater and #probablemodels in Pittsburgh, PA. The show will run through November 2nd.

I am showing my project, A Machine For Living In, at the Foster Art Gallery at Westminster College.

A Machine For Living In is a digital media installation using smart technologies to explore the home as a site of intimate life. Incorporating video, sound, and sculpture, the project showcases machine observers and their memories of from within the artist’s home. Inspired by speculative science fiction and smart home technologies, this installation explores narratives of human-machine cohabitation. What emerges is a contemporary portrait of the everyday.

END_OF_DOCUMENT_TOKEN_TO_BE_REPLACED

I’m showing my project Convex Mirror as part of the Harold Cohen exhibition “Creating Computational Creativity” at the University of California, San Diego.  Details below.

END_OF_DOCUMENT_TOKEN_TO_BE_REPLACED

Collaboration with Dana Sperry on one segment of the Exquisite Donut project.

END_OF_DOCUMENT_TOKEN_TO_BE_REPLACED

My new project, The Serious Business of Children is showing at Gallery 4Culture for October 2015.

Robert Twomey’s room-scale mechatronic installation, The Serious Business of Children, examines issues of meaning and expression from the oblique angle of children’s pre-language. Twomey populates his room with a number of speaking, listening, and drawing machines that communicate with one another using synthesized voices and drawings in a process of continuous translation from word to image. Audio recordings and children’s drawings are the raw material of the system. They are analyzed by computer and re-synthesized by machines. The project uses children’s early expressions as protolanguage, unintelligible in any conventional sense, but communicative in other registers.

Robert Twomey’s project was inspired by the notable American philosopher John Rogers Searle. Searle, whose expertise was in the philosophy of language, developed the “Chinese room” argument to challenge the popular idea called “strong” artificial intelligence, that it’s possible for a computer running a program to have a “mind” or “consciousness” (think Hal in 2001). 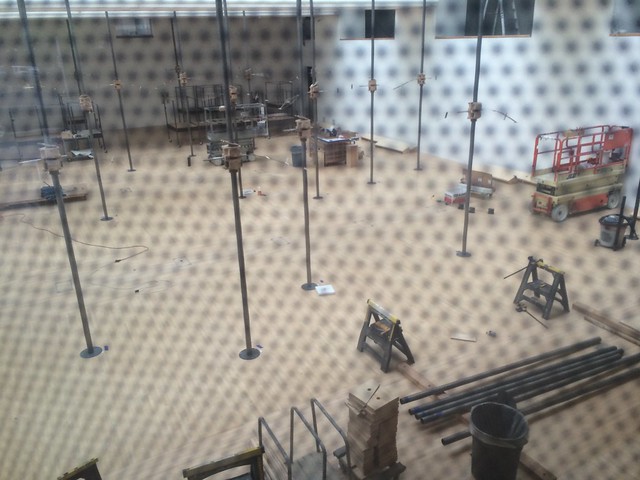 I’ve built the control system for Ann Hamilton’s Bullroarer installation at the Henry Gallery. This piece, with 21 independent mechatronic sound makers, is installed in the main space of the Museum for her show, Ann Hamilton: the common S E N S E, opening October 11th 2014.