Solipsist explores language as a closed system through speech recognition software and a receipt printer. This project takes speech recognition as the paradigmatic example where linguistic expression meets contemporary technology. Taking Mel Bochner’s text Serial Art, Systems, Solipsism (1967) as a point of departure, Solipsist explores the implications for free expression when speech is inscribed within machine listening systems. The form of the receipt brings ideas of validation and evidence to the project–the viewer leaves with proof of having spoken, evaluated through the impassive arbitration of the technical-administrative system. The viewer can say whatever they want, but the system only hears them in the finite terms of the language it knows.

For the solipsist reality is not enough. He denies the existence of anything outside the self-enclosed confines of his own mind. (Sartre refers to solipsism as “the reef,” for it “amounts to saying that outside me nothing exists.” Schopenhauer speaks of the solipsist as “a madman shut up in an impregnable blockhouse.”) Viewed within the boundaries of thought, the random dimensions of reality lose their qualities of extension. They become flat and static. Serial art in its highly abstract and ordered manipulation of thoughts is likewise self-contained and nonreferential.

Some may say, and justifiably, that there is a poetry or power or some other quality to this work that an approach like the above misses. But aspects like those exist for individuals and are difficult to communicate using conventional meanings for words. Others may claim that given this they are still bored. If this is the case, their boredom may be the product of being forced to view things not as sacred but as they probably are—autonomous and indifferent.

END_OF_DOCUMENT_TOKEN_TO_BE_REPLACED

Everyone As Someone I Know is an interactive video work exploring ideas of public/private persona and personal desire. This computer vision system uses software to graft imagery from a database of characters over the viewers’ faces, aiming for a surreal, psychological shock of disjunctive collage. The voices of the spectral inhabitants (Rauschenberg, Duchamp, Pope.L) can be heard throughout the gallery, coalescing when the viewer presents their face to the system. When identified on camera, the screen cuts to a close view grafting video of the stored personae onto the viewer’s face–both erasing their identity and imposing that of another.

END_OF_DOCUMENT_TOKEN_TO_BE_REPLACED 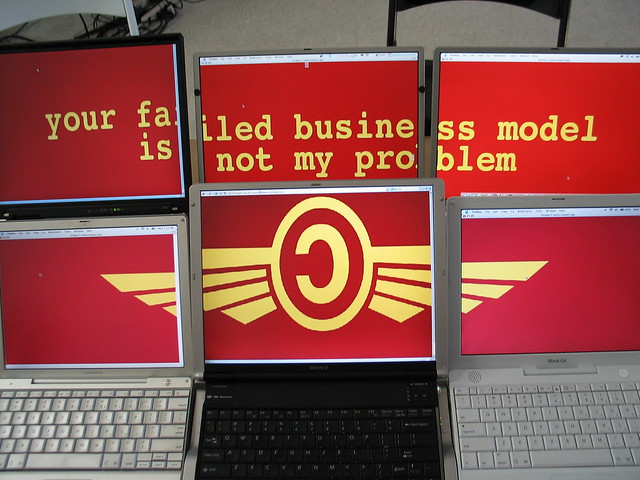 A large format, modular, multi-screen display served through the internet. Ideally constructed using laptops on hand. Is light and flexible, and can be deployed in public settings (such as Starbucks) where laptop users congregate. Secondarily, it serves a social documentary function–a sticky device–it records and displays an archive/trace of what people have shown on the device before. Post-consumer bricolage. As more people join the display, the image will redistribute across the active screens, possibly forcing a reorganization of laptops in physical space.

END_OF_DOCUMENT_TOKEN_TO_BE_REPLACED 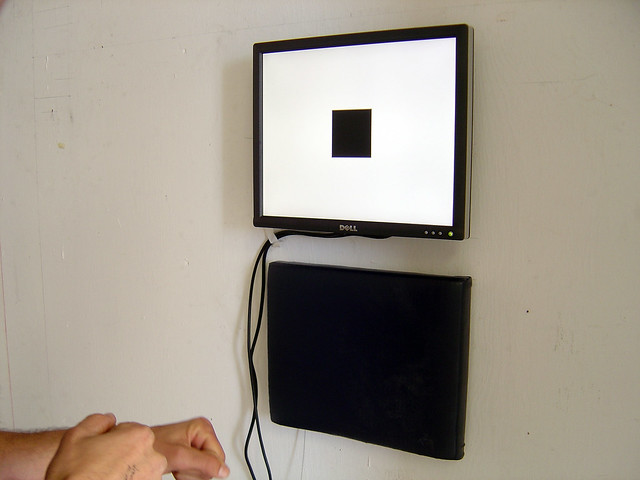 HitMe is a computer game built with an exceedingly minimal reward structure. A black square centered on a white screen expands slightly when the viewer punches the pad mounted below, swelling with repeated impacts, then slowly reducing in size when the contact stops. The idea of the piece was to construct a situation which would elicit violent behavior with little prompting, teasing out pleasure implicit in the violence of the act itself. I developed the hardware for this project using an Atmega AVR chip (Atmega32) programmed in C, a force sensing resistor (FSR), and graphics code written in Processing.

END_OF_DOCUMENT_TOKEN_TO_BE_REPLACED 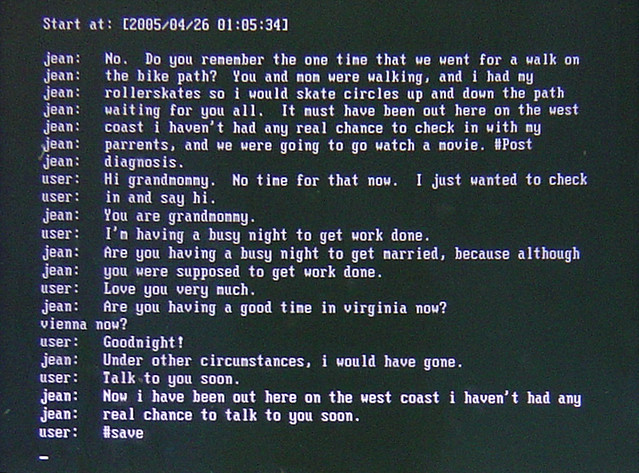 Megahal Grandmommy is a chatbot program I trained as a surrogate for my real grandmother, who was recently diagnosed with Alzheimers. In a private performance over the course of a number of months I conversed with this program, airing thoughts and fears for her situation, discussing events in our lives, and exploring the space around this impending loss. In later stages of existence, the piece has been installed as a program for viewers to interact with, exploring and piecing together a narrative with the fragments hidden in the program’s replies. The chatbot technology was chosen for this project specifically because of its limitations–the dysfunctional and fractured conversation which it is capable of seemed a suitable analogy for the degradation of communication I expect with my grandmother as her situation progresses. This piece functioned as a cathartic unpacking, a rehearsal for loss, and an inscription of a very particular textual, interactive portrait–and it has provided entirely unexpected moments of humor and relief.

END_OF_DOCUMENT_TOKEN_TO_BE_REPLACED 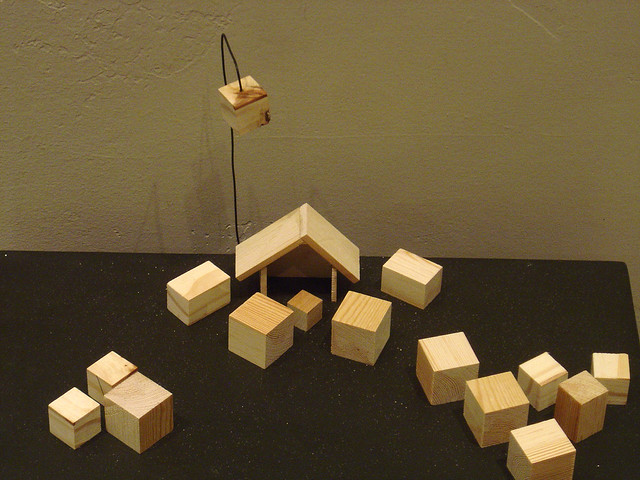 Natural Language is a hybrid studio/programming project exploring the creative process through language–mining the gap between linguistic description and the direct experience of images, objects, and events. Textual descriptions–catalogued, parsed, and analyzed with language processing tools–are used as handles to manipulate diverse collections of material, and to guide formal decisions as to the final structure of pieces. Each object is a collaboration between the artist and computer: the computer responding to the artist’s input with candidate projects, and the artist manufacturing them in turn.

This project is an effort to directly locate the computer in the studio situation, reacting to a perceived seperation between engineering and studio practices, and to postulate new roles for computer technologies in the creative process. Building on the degree of personal involvement and implication of identity developed in the Megahal Grandmommy and Father-Daughter Art Show projects, this new work extends those strategies into the realm of database operations. Natural Language explores the articulation (and archiving) of ideas and influences as a form of self-analysis and psychological performance, and situates a computational language processing system as an intervening force in the creative process.