he set himself / With great art to copy all that he saw in the glass.

Resuming Parmigianino’s project of self-portraiture in our contemporary era, this project uses a CNC plotter, 180º circular fisheye lens, and custom software to record a layered image of place. Substituting computer vision and precision automation for the human eye and hand, this project operates at a physical precision and temporal duration beyond what is humanly possible. Laboring over a three-month period it produced a series of 6 site-specific drawings documenting the Amazon campus in downtown Seattle.

END_OF_DOCUMENT_TOKEN_TO_BE_REPLACED

This project is a response to John Searle’s Chinese Room. It explores child-writing and child-speech as protolanguages, unintelligible in any conventional linguistic sense but rife with poetic possibilities and communicative in other registers, on the level of shared biological and developmental experience. The system is composed of a number of static materials and two active agents: a child speech synthesis system, and a mechatronic child drawing apparatus. The system operates in cycles: synthesizing child speech, which is then interpreted and transcribed by speech recognition system, in turn launching the drawing machine into a round of additions to a cumulative drawing on the wall. As the cycle repeats, periodic bursts of child speech are followed by the sounds of stepper motors and pen-and-ink inscription.

Children’s voices were sourced from an online speech research database, and videos of children babbling and learning speaking their color words. Child drawings were gathered from a range of sources demonstrating different levels of representational and typographic development. My eye and hand were the means of data entry for the children’s drawings: I traced them into the system using the recording apparatus at left. This produced position-time series of pen motions which were broken apart and re-synthesized as the source data for the system’s machine drawings.

END_OF_DOCUMENT_TOKEN_TO_BE_REPLACED We aimed to (1) create a contemplative space for self-reflection, (2) create a mysterious second layer of technology, and (3) bring a sense of humor to the building. This installation was built in the Reconfigurable Studio #4 in the CalIT2 New Media Arts Wing for the building dedication ceremony.

END_OF_DOCUMENT_TOKEN_TO_BE_REPLACED

This performance explores the bond that purportedly exists between a man and their gun, and through it, investigates the nature of my own attraction to weapons and military culture. My goal was to stage a complicated and compromised version of a bonding ritual that would question the sexualized, hetero-masculinist culture around guns.

END_OF_DOCUMENT_TOKEN_TO_BE_REPLACED

An ambient architectural display fashioned from a traditional LCD screen, backlit by the sun. END_OF_DOCUMENT_TOKEN_TO_BE_REPLACED 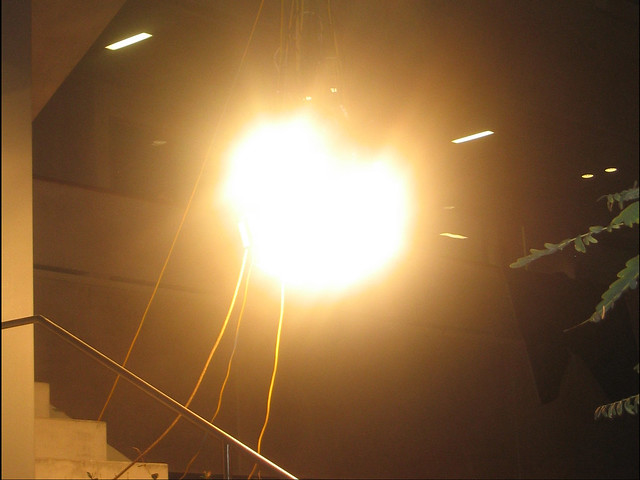 A large, bright light built with halogen work lamps and extension cords. This piece has been built in a variety of configurations in a variety of locations. I wanted to create a sensorial, bodily experience of electricity, and to flood a space with light and heat. 15000 Watts. (30 x 500W work lamps)
END_OF_DOCUMENT_TOKEN_TO_BE_REPLACED